One Hair From Nine Oxen 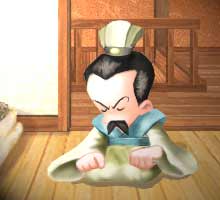 Li Ling was a great general during the time of emperor Han Wu-di. He was a very good fighter, and he won every battle. One time, however, Li Ling's troops were so hopelessly outnumbered by the Huns that although they fought bravely, the whole army was soon taken captive. Li Ling shamefully surrendered for the moment, planning to wait for an opportunity to strike back. But when news of the surrender reached the capital, the emperor's jealous ministers began to degrade Li Ling in front of the emperor. What he heard made the emperor so angry that he had Li Ling's wife and mother put to death.

Ze-ma Chian, who had always respected Li Ling, believed that he wouldn't surrender without a reason, and urged the emperor not to believe rumors. This time, the emperor grew angry at Sz-ma Chian, and locking him up, punished him severely. Sz-ma Chian then wrote a long letter to a friend, saying, "I am now in the middle of writing a history book. If I die, it will be as if one ox in a group on nine were to lose a single hair, or as if one ant were to die. I am willing to withstand punishment in order to complete this book." Sz-ma Chian finally did finish his book - the very famous Shr-Ji.

Thus, to say that something is like "one hair from nine oxen" is to say that it is very insignificant.