One Character is Worth a Thousand Taels of Gold 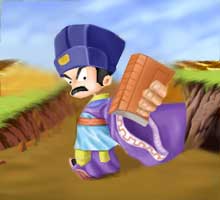 Lu Bu-wei was the prime minister of the state of Ch'in during the Warring States Period. He was very powerful; even the emperor would do whatever he said.

Although Lu Bu-wei was a very capable politician, in the area of literature, he was not so talented. So he engaged over 3000 scholars in the task of writing a set of books for him, the content of which included astronomy, geography, the words and deeds of people of ancient times, etc. This set of books, called Lu-shr Chuen-chiou, was over 200,000 characters in length.

Lu Bu-wei was so pleased with these books that he had them put on the city gate of the Chi'in capital. He also put up an announcement, saying that if anyone could add or subtract one character from his books, that person would be given 1,000 taels of gold. Thus, Lu-shr Chuen-chiou became known throughout the land as the set of books in which "one character was worth 1000 taels of gold."

Today, this idiom is used to describe writings which are exceptionally well-written in terms of both content and style.