To Be Behind Sun Shan 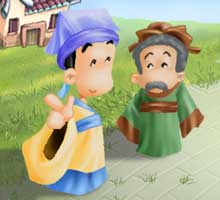 Sun Shan, of the Sung dynasty, was a very intelligent scholar. He liked to tell jokes, and so his friends gave him the nickname, "the comical genius". When Sun Shan was on his way to take the government service exam, a neighbor came and asked if he would take his son along too, as the son was also interested in serving as a government official. Sun Shan readily agreed.

When the test results were posted, Sun Shan found that his neighbor's son had not passed, and that he himself was the last on the list. As soon as he arrived at home, his neighbor came to ask how his son had done. Sun Shan read the neighbor two lines from a poem, the meaning of which was, "The last name on the list was Sun Shan; your son's name is behind Sun Shan!"

Today, this idiom can be used to describe a person who has not passed an exam, or who has been unsuccessful at some kind of competition.