To Return the Jade Intact To Chao 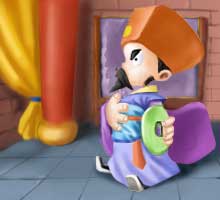 During the Warring States Period, the king of Chao received a very rare, very valuable piece of jade. When the king of Ch'in heard about this, he offered him fifteen cities in exchange for the jade. As Ch'in was a very strong state, the king of Chao did not dare refuse, and so sent Lin Shiang-ru to Ch'in with the jade.

As soon as he set eyes on it, the king of Ch'in loved the jade. He looked it over carefully, and then passed it around among his attendants, praising it all the while. He did not mention the fifteen cities, and Li Shiang-ru soon realized that he had no intention of making the exchange at all. So Lin said to the king, "Your Majesty, this jade has a small flaw in it." Reaching out as if to point out the flaw to the king he instead took the jade and stood with it next to a stone pillar. He told the king that unless he was still planning to offer Chao the cities in exchange, he would not receive the jade, but the king just laughed and asked Lin how he intended to get the jade out of Ch'in. Lin then said, "If the king forces me, I will smash this jade along with my head against this pillar." Seeing that he was serious, the king had no choice but to let him return to Chao with the jade.

Now, when we return a thing intact to its owner, we can say that we are "returning the jade intact to Chao."