To Attempt To Go South by Driving the Chariot North 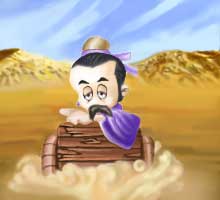 During the Warring States Period, the king of Wei was planning to attack the kingdom of Chao. A man named Ji Liang heard of this plan, and immediately went to call on the king, to urge him not to attack. He said, "I just met a man who said that he was going to Ch'u, in the south, but he was heading north. When I asked him why, he said that he had a strong horse, a lot of money to spend on the trip, and a skilled driver. Your Majesty, do you not think that by going this way, this man was heading away from, instead of towards, the kingdom of Ch'u? I also once heard His majesty say that he hoped to become a great ruler, whom everyone would obey. And yet now, you plan to invade the kingdom of Chao in order to expand your territory and glorify your own name. Do you not feel that by acting in this way, you are moving farther and farther from your goal?" The king agreed with what Ji Liang had said, and agreed not to attack Chao.

Today, we can say that a person whose actions hinder, rather than help, the complation of his goal is "attempting to go south by driving the chariot north."