The Courtyard Is As Crowded As a Market Place 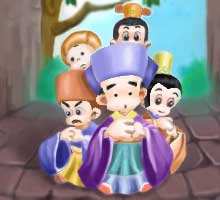 During the Warring States Period, there was a very handsome government official name Tzou Ji who lived in the kingdom of Ch'i. One day, he said to his wife, "Everyone says that Mr. Shu, from the Northern City, is very handsome. Who is better - looking, he or me?" His wife answered, "Of course you are." Tzou Ji posed the same question to his maidservant, and then to a guest who came to his house. Both the maidservant and the guest answered that he was the better - looking of the two.

Sometime later, Tzou Ji saw Mr. Shu in person, and discovered that Mr. Shu was indeed more handsome than himself. Tzou Ji then realized that his wife, his maidservant, and his guest had all lied to him - his wife because she loved him, his maidservant because she was afraid of him, and his guest because he needed his help. When he went into court, he reported his findings to the king, and suggested that he think of a way to get people to tell the truth. The king agreed, and immediately issued a proclamation stating that anyone who could point out his faults would be rewarded. As expected, everyone came to offer an opinion, and from morning till night, the courtyard was as crowed as a marketplace.

Today, this is used to describe any crowed, busy place or circumstances.